His interviews on NPR, CNN and the Washington Post

…on their personal birth chart. People who have Virgo rising, he said, will be the most likely to suffer ill effects.RandyGoldberg, who also practices astrology in Washington, predicted more concrete results for the general public.”On a collective level, there are some ominous… 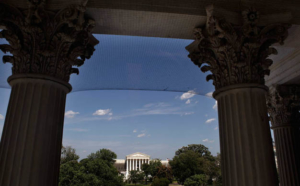 Perhaps you’re having communication problems with your spouse or can’t figure out your next career move. Maybe you just have an eerie sense that something ominous is on the horizon.
That eclipse you saw last night — or didn’t — could be to blame. A full lunar eclipse is a fraught symbol in the astrological world. One local criminal lawyer turned astrologer warned that it would trigger feelings of frustration. Another astrologer said it could foreshadow a terrorist attack in April.
A skeptic would call that hogwash, but half a dozen astrologers invited nonbelievers to review their past predictions, saying their results have been too accurate to be simply coincidence.
The first total lunar eclipse in more than two years was visible in the D.C. region between 5:54 and 6:38 last night, casting a crimson glow over the full moon. Lunar eclipses occur when the moon is obscured by the Earth’s shadow.
Although partial eclipses occur about twice a year, total eclipses are rare because the moon is usually above or below the plane of Earth’s orbit.
The occasional event does not hold any particular scientific value, NASA researchers said, but amateur and professional astrologers beg to differ. Any time a major celestial body is completely blocked, several astrologers said, humans are bound to feel the
Randy Goldberg, who also practices astrology in Washington, predicted more concrete results for the general public.

“On a collective level, there are some ominous trends that are out there,” said Goldberg, who has been performing astrology services for 20 years. “This particular eclipse is very connected with economic cycles, so there is a strong possibility of a strong economic downturn, especially with the property bubble bursting. In April there could be a terrorist thing.”

Goldberg said his research indicates that a lunar eclipse often brings to the forefront problems that have been buried in one’s subconscious. A person’s shadow — a concept developed by psychologist Carl Jung to describe parts of life one hopes to repress — can make a sudden appearance around the time of an eclipse, he said.

“Things that are unseen become seen,” Goldberg said. “It can be negative in terms of seeing this stuff you’re trying to put off and not deal with, a part of yourself you don’t accept.”

Both of Randy’s predictions came true. See the following:

US home sales plummeted dramatically last month, marking the biggest monthly fall in over 18 years and dashing hopes the market was poised to rebound, new industry figures showed Tuesday.
The National Association of Realtors (NAR) said existing US home sales sank a heavy 8.4 percent to an annualized pace of 6.12 million units in March, well below most forecasts that had predicted sales of 6.45 million units.
Sales of apartments and homes across the United States had been expected to drop in March, but the decline was much worse than anticipated and some analysts said it would ratchet up pressure on the Federal Reserve to cut interest rates.
“Ugly is the simplest word for this report,” said Joel Naroff, of Naroff Economic Advisors, who advises financial firms on economic matters.
The drop in homes sales was the largest since January 1989 when sales dived 12.6 percent, and sales are now at their lowest ebb since June of 2003.

Gunman Kills 32 at Virginia Tech In Deadliest Shooting in U.S. History By Ian Shapira and Tom Jackman Washington Post Staff Writers
Tuesday, April 17, 2007;
BLACKSBURG, Va., April 16 — An outburst of gunfire at a Virginia Tech dormitory, followed two hours later by a ruthless string of attacks at a classroom building, killed 32 students, faculty and staff and left about 30 others injured yesterday in the deadliest shooting rampage in the nation’s history.